Private forest landowners represent the first step in the forest bioenergy supply chain. Their production of a cellulosic feedstock is central to the emerging bioenergy industry and is equally important to their own forest-based economic and ecological revenue streams. This fact sheet describes the forest biomass/bioenergy production benefits relevant to private forest landowners in the South.

In general, the potential benefits to forest landowners include:

• Low to no cost stand improvement

One benefit to private forest landowners from the sale of forest biomass for bioenergy or bio-products is additional income. Currently across the South, quite a few mills are purchasing wood chips for various operations, mostly to produce traditional fiber and wood products1 (Figure 1). 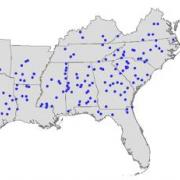 Several biodiesel and ethanol plants are also in operation, and more ethanol (Figure 2) and biodiesel (Figure 3) plants are under construction throughout the South. Currently, many of these mills and plants are not using woody biomass for energy production. Yet as the bioenergy industry develops, the demand for cellulosic material will increase and more opportunities will be available for private landowners to sell their forest biomass. For the latest information on biomass markets in your area, please refer to Southern Regional Extension Forestry (http://sref.info/), your state forestry Cooperative Extension program, or state forestry agency. 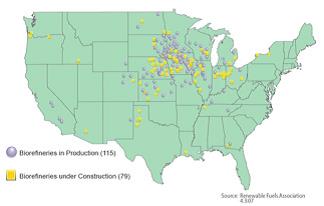 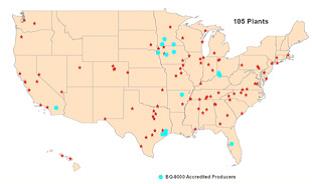 Site preparation costs are a major component of forest stand regeneration costs. According to a south-wide survey in 20042, the cost to shear-rake-and pile, a common site preparation activity in the South, averaged $186/acre. Landowners can save as much as $80 to $100/acre in site preparation costs when logging residues are recovered for bioenergy and bio-products markets3. Technical and terrain constraints limit the amount of logging residues that can be collected from harvesting sites to about two-thirds of the actual material left on-site. The periodic removal of logging residues does not have significant negative impacts on the long-run productivity of most sites because timber harvesting tends to be an infrequent event on individual sites.

Given increasing concerns about global climate change and air pollution, reductions in greenhouse gas emissions are desirable. In fact, sulfur markets to control SOx emissions have existed for years. Carbon markets are just now emerging. Forest bioenergy is carbon neutral, meaning that producing energy from forest biomass does not lead to net emissions of CO2. This is the case because tree growth via photosynthesis absorbs carbon, which almost completely offsets the carbon emissions resulting from burning the tree for energy. Using forest biomass for bioenergy production can displace CO2 emissions from combusting fossil fuels. In addition, biomass releases much less SOx during combustion than coal.

In April 2007, CO2 traded at about $4/ton at Chicago Climate Exchange (http://www.chicagoclimatex.com/). In electric power generation, one ton (green) of forest biomass can displace almost one ton of CO2 emissions from coal-fired power plants. This implies that one ton of forest biomass used for electricity production would be worth $4 in terms of CO2 emissions displaced at current carbon prices. Though the carbon value is not big at this point, the carbon price is likely to increase as markets are further developed and concerns about greenhouse gas emissions escalate.

Low to No Cost Stand Improvement

In many areas, particularly hardwood dominant areas, high-grading and diameter-limit-cutting have resulted in low stocking, low value, and undesirable or non-merchantable species. These timber harvesting practices have undermined the long-run productivity of many forests. The impacted forests are not likely to recover without stand rehabilitation and improvement. The development of a bioenergy industry is a potential solution, as this industry should create biomass markets for low value species, and simultaneously stimulate timber stand improvement efforts. Additionally, the development of biomass/bioenergy markets should aide in a landowners’ ability to carry out pre-commercial and commercial thinnings. and subsequently the production of high-quality timber. Landowners should make decisions regarding stand improvement and/or thinnings based on their ownership objectives, forest and market conditions, and financial parameters (e.g. the discount rate, etc.).

Major threats to the health of southern forests include wildfire, disease/pest infestations, invasive species, and storms. In fact, it is estimated that 2.7 billion dry tons of forest biomass need to be removed through forest fuel reduction treatments in the South, about 20 million dry tons of which are collectable annually4. On average, the southern pine beetles killed 1.36 million dry tons of wood annually5. In addition, restoration of the stands damaged by storms and fire and the control of invasive species could generate significant additional volumes of biomass. These mitigation or restoration activities, though improving forest health and long-run productivity, are often costly and discouraging to the landowner. The revenue from biomass can offset part of the mitigation/restoration costs.

Producing forest biomass for energy and other bio-products generates not only additional revenue from biomass sales but also a variety of other benefits to landowners. Depending upon the sources of forest biomass, additional benefits include savings on site preparation costs and improvements on forest health and productivity. In addition, carbon values/credits could also be realized by forest landowners as carbon markets and policies are further developed. The benefits from producing forest biomass can be significant and may become important factors influencing a landowner’s decision to produce biomass for energy from conventional forests. Landowners should weigh all benefits against the cost of biomass production in their decision-making.