Petroleum-based feedstocks have dominated as industrial inputs over the past century. The rising petroleum prices, a decline in petroleum reserves, and consumer demand for environmentally friendly products are resulting in numerous opportunities for bio-based materials in the marketplace. This fact sheet is a partial list of bio-based materials currently on the market. As university and industry-directed research and development continue, new, innovative substitutes for traditional petroleum-based products are discovered at a rapid rate.

Pellets. Pellets are small biomass particles such as straw, sawdust, and chips that have been processed and converted into small, dense, uniformly shaped aggregates. Increasing density allows for easier handling and storage. In addition, the uniformly low moisture content of pellets leads to high combustion efficiency. (Image 1) 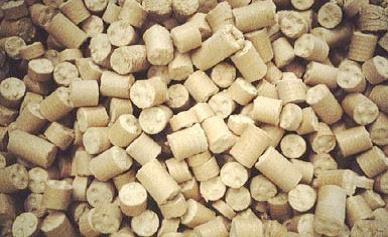 Pellet stoves, designed to burn pellets, are a heating alternative for residential or small-scale use and are increasingly popular. Clean burning, the stoves offer convenience along with energy efficiency. Bags of fuel pellets stack compactly, store easily and are uniform. Their small shape allows them to flow easier, making the automation of fuel handling easy. Currently, the Southeast has about 15 wood pellet manufacturers. The Pellet Fuels Institute, which can be accessed at www.pelletheat.org, provides detailed information about the wood pellet market. In addition, the Institute provides a comprehensive list of pellet manufacturers in the Southeast and the entire United States. (Image 2)

As Sweden, Germany, and other European Union members institute more stringent environmental laws, the markets for wood pellets increase. An average energy production plant in the European Union will need to replace nearly 34,000 tons/year of coal with an alternative feedstock such as wood pellets2.

Char. Char is the solid portion of biomass that does not fully react during pyrolysis, combustion or thermochemical liquefaction. It is used to produce steam for heat and energy after being recycled. It can also be used as a filtration agent when converted to activated carbon. Additionally, char is used as fertilizer as well as charcoal briquettes (Image 3). 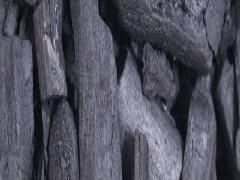 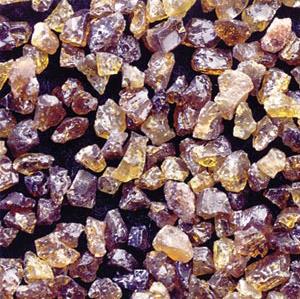 PHA Polymers. PHA (Polyhydroxyal-kanoate) polymers are one of many products formed as a result of lignocellulosic fermentation. PHA can be used to make bottles and plastic packaging because of tensile strength and elasticity. Recently, it has been recommended for the transportation industry because it is extremely fire resistant when broken down to PBO(Polybenzoxazole) as a result of exposure to heat.

Bioplastics. Renewable resources such as industrial starches, fatty acids, and vegetable oils can serve as sources for bioplastics. Biodegradable thermoplastics such as starch esters, cellulose acetate blends, polylactide, and thermoplastic proteins such as zein, and polyhydroxybutyric acid (PHB) show great promise for replacing the plastics derived from petrochemicals that generally are not biodegradable1.

Biopolymers. The great majority of all biomass consists of polysaccharides. These natural biopolymers can be used both in their original form after extraction from plants or as the skeletal framework of other derived polymers. By far the most abundant of these carbohydrate polymers is cellulose, the principal component of cell walls of all higher plants. While use of biopolymers is now considerable, the current use represents only a small fraction of the total market potential, as measured by biopolymer plus petroleum-based polymer demand. The substitutional potential is enormous. Broader application of such preformed polymeric materials awaits research and development.

Recent developments are raising the prospects that many petrochemically derived products can be replaced with industrial materials processed from renewable resources. Scientists and engineers continue to make progress in research and development of technologies that reduce the real cost of processing plant matter into value-added products. Simultaneously, environmental concerns and legislation are intensifying the interest in agricultural and forestry resources as alternative feedstocks. Sustained growth of this developing industry will depend on developing new markets and cost-competitive bio-based industrial products.

For more information, please refer to the Encyclopedia of Southern Bioenergy at http:// www.forestencyclopedia.com/Encyclopedia/ bioenergy.