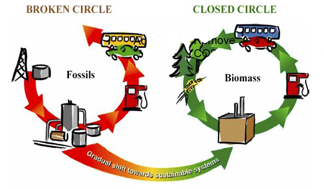 Wood, coal, oil and natural gas are all made of carbon-based compounds. Burning these feedstocks releases carbon, which then becomes carbon dioxide, a major greenhouse gas. The big difference between wood and fossil fuels is that the carbon released by burning wood has been recently circulating through the atmosphere. Growing plants and animals absorb and release carbon every day, and cycling this carbon is a benefit that our ecosystems provide to us. In addition, the newly planted trees, if grown to the same size as the trees being replaced, will absorb about the same amount of carbon during their lifetime as they release when converted into energy. Burning coal, natural gas or oil, on the other hand, releases fossilized carbon that has been out of circulation for millions of years. This fossilized carbon, when added to the atmosphere, is thought to contribute to global warming. Notably, woody biomass that is produced, harvested, transported and processed using fossil fuels is not completely carbon neutral. However, if biofuels were used for all of the steps of harvesting and using woody biomass, it could be a nearly carbon-neutral energy source.