Energy is one of the main applications of woody biomass and forest residues. Wood is the main source of energy for more than 2 billion people and provides more than 14 percent of the world’s total energy1. Demand for wood-based energy is even higher in developing countries where bio-energy is often the only readily available, accessible source of heat and fuels. To understand the importance of wood-based energy, examine the potential energy values of woody biomass, and how these values compare to that of other energy sources, energy density, and the concept of net energy gain.

Density. Energy density is another common measure of the possible potential of a fuel. Energy density is the heating value per unit volume. It is measured as MJ/kg per cubic meters. Energy density is affected by harvesting and pre-processing mechanisms. For example, wood chips, a common source of energy, have a higher energy density than unconsolidated or bundled woody biomass but a lower energy density than solid wood. Roughly, one cubic meter of wood produces 2.5 cubic meters of chips (Figure 1). However, wood chips have a relatively low energy density in comparison with fossil fuels. The space required for transporting, storing, and drying an equivalent heating value of chips is 13 times greater than the space needed for oil and four times greater than the space needed for coal3. This difference results in higher utilization costs for chips in comparison with fossil fuels. Consequently, they are most economically feasible when used close to the source. 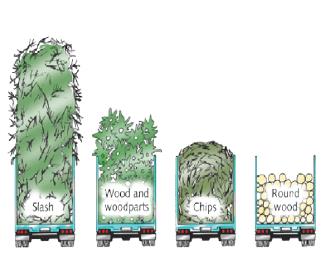 These simple suggestions help increase the energy density of chips3:

1. Reduce ratio between diagonal length and thickness of chips.

2. Have a heterogeneous size distribution.

4. Compaction from blowers is better than free-fall loading systems.

5. The longer the storage and drying time, the higher the solid content.

Woody Biomass Feedstocks versus Fossil Fuel Feedstocks. Fossil fuels are more energy dense and have higher heating values than woody biomass alternatives. So from an economic perspective, whether the United States chooses to embrace an alternative energy future will depend upon political and social choices (Table 2). At this time, costs of producing energy from woody biomass feedstocks, compared to fossil fuel feedstocks remain a major barrier to market development.

To be a viable alternative, biomass should provide a net energy gain or produce more energy than the amount it takes to grow and process the fuel5. This net energy gain is measured by energy ratios. Ratios below 1 suggest that the energy input is higher than the energy output. Research shows that woody biomass utilization results in energy ratios above 1; energy input is less than energy produced. Current technologies for the production of electricity from wood give ratios between 6 and 7, surpassing other competitors. Increasing these ratios to 10 or 15 is even possible with technological improvements6.

The total worldwide production of wood in 2000 was about 3.9 billion cubic meters, of which 2.3 billion were used for wood-fuels1. Nearly 60 percent of the world’s total wood removals were used for energy purposes. Wood energy provides an alternative to fossil fuels, a means to combat a changing global climate, and an environmentally sound sustainable energy future.

For more information, please refer to the Encyclopedia of Southern Bioenergy at http:// www.forestencyclopedia.com/Encyclopedia/ bioenergy.