Ethanol, also known as ethyl alcohol or grain alcohol, is a flammable, tasteless, colorless, mildly toxic alcohol having a fairly distinguishable odor. It is the same alcohol found in alcoholic beverages and is used alternatively for industrial purposes as well as a transportation fuel. Industrial produced ethanol is used in solvent-based paints, pharmaceuticals, perfumes, inks, and cleaning products. As a biofuel, ethanol is produced most commonly from corn and sugarcane feedstocks. It has the potential to be produced from woody biomass feedstocks. Yet this has rarely been the case except in laboratory situations.

History of ethanol Ethanol is by no means a new alcohol. The use of ethanol by humans dates back to prehistoric times when the substance was largely consumed as a beverage. It was not until the early to middle 1800s, however, that ethanol was first dissected as a compound and prepared synthetically. Ethanol, as a fuel, was used in lamps during the pre-Civil War era, but a liquor tax placed on ethanol to help fund the war made the fuel costly compared to kerosene and other fuels. Ethanol rose again briefly in popularity when Henry Ford designed the model T automobile to run on the fuel. However, this was short lived with the onset of Prohibition-related bans.

In the 1960s and 1970s, interest in fuel ethanol was stimulated due to large imports of foreign crude oil. In the U.S., the primary approach was the production of gasohol, a blend of about 90 percent gasoline and 10 percent ethanol. Corn was the major feedstock for ethanol. As octane enhancers, ethanol and its derivative ethyl tert-butyl ether actually increase the efficiency of gasoline burned in internal combustion engines. Gasoline remained the primary fuel because if its lower cost in production compared to ethanol.

Today in the U.S., ethanol occupies a niche in the transportation fuel market. Ethanol or methyl ter-butyl ether (MTBE) is used as an oxygenate in urban areas that do not meet U.S. Environmental Protection Agency (EPA) air quality standards to increase the combustion efficiency of gasoline, thus decreasing carbon monoxide emissions in cold weather. This is especially the case now that five states using MTBE are phasing the additive out as an oxygenate due to its toxicity (Figure 1). 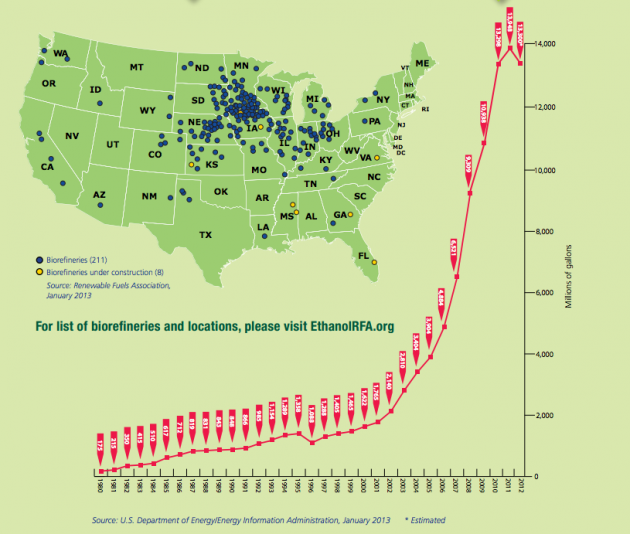 Today many automobiles manufactured in and for the U.S. are equipped to run on either gasoline or E85, a blend of 85 percent ethanol and 15 percent gasoline1. Flexible fuel vehicles (FFVs), at no extra cost to the consumer, have a few minor engine modifications and a fuel line made out of a slightly different material than that found in conventional automobiles. E85, although manufactured in large quantities elsewhere, is still relatively hard to find in the U.S.

In the U.S., demand for starch-based ethanol is influenced by the commodity market price for corn. During the 1995 to 1996 marketing year, high demand for corn grain drove up corn prices to record levels, leading to high input costs and a downturn in ethanol fuel production. Many ethanol producers opted to suspend ethanol production and do maintenance on their manufacturing facilities. Other producers diverted ethanol fuel production to the alcoholic beverage market.

How is Ethanol Made? Ethanol is produced chemically through the hydration of ethylene and biologically by fermenting sugars with yeast. Ethanol for industrial purposes is most often made chemically, whereas ethanol for fuel is often made biologically or with a two-step process of hydration and fermentation. In general, to make fuel ethanol from biological feedstocks, certain yeasts break down sugar in the absence of oxygen producing ethanol and carbon dioxide. With woody biomass, the process is a bit more complex. Hydrolysis of cellulose, the decomposition of cellulose by reaction with water, must occur first in the woody biomass to produce reducing sugars. Once this occurs, the sugars can then be broken down to produce ethanol and carbon dioxide. For more information on the fermentation process, please refer to the Fact Sheet 5.3 Technological Processes: Bio-chemical.

While the science behind making ethanol from woody biomass has been in place since before these fuels were used to power vehicles, large-scale production of fuel ethanol from lignocellulosic materials has been unfavorable economically2. Cellulase enzymes, the enzymes that break down cellulose in the hydrolysis phase, have been cost prohibitive to use3(Image 1). 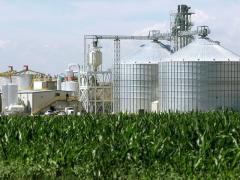 • The U.S. ethanol  industry encompasses 211 plants operating in 29 states, with an annual capacity of 14.8 billion gallons.

• Ethanol is found in more than 96 percent of all gasolines.

• The U.S. industry exported an estimated 700-750 million gallons of ethanol.

Why is Cellulosic Ethanol Important? Cellulosic ethanol, which is ethanol created from feedstocks containing cellulose, is not only created from a sustainable, renewable resource but it also burns cleaner than both gasoline and diesel. Environmentally speaking, ethanol has both low carbon and sulfur emissions as well as very little particulates. The large-scale production of ethanol from woody biomass or lignocellulosic biomass, in particular, is important because it would mean less waste when producing biofuels from feedstocks such as corn and cane. All of the feedstock could be used rather than just a few parts. In addition, complete replacement of petroleum-based fuel with food-based fuels alone would most certainly affect food supplies4. Additionally, a renewable resource like ethanol is more likely to be socially acceptable than a non-renewable resource such as fossil fuel. Because the woody biomass to produce can be grown and processed locally, there is less dependence on foreign sources of fuel.

While the majority of fuel ethanol continues to be produced from food-based feedstocks such as corn and sugarcane, there remains great opportunity in the use of woody biomass feedstocks for ethanol. Technological advances and research into how to reduce the costs are promising.

For more information, please refer to the Encyclopedia of Southern Bioenergy at http://www.forestencyclopedia.net/p/p2.