Developing a forest bioenergy industry can have a number of positive effects on the rural economies of the South. Employment, tax-base, rural infrastructure, economic diversification, and a host of other areas can be affected by increased use of forest resources for bioenergy. This is especially critical given the recent downward trends in the pulp and paper and furniture sectors in many parts of the South. Of these impacts, the most significant is probably the potential to create jobs and income. Research has shown that bioenergy has the greatest potential for employment creation among renewable energy sources1. Woody biomass harvesting, transporting, and processing are labor intensive. In addition, high transport costs limit the economical transportation distance for woody biomass feedstocks, keeping jobs in the local area. This is important for areas looking to replace forestry jobs lost due to mill closures and industry restructuring.

The magnitude of the socioeconomic impact depends on many things, including the final energy product produced, the quantity and quality of the feedstock under management, the nature of technologies available, and the production processes undertaken by the various bioenergy industry partners. The local economic structure, social profile, and engagement in trade with outside economies will also affect the ultimate impact. Here is a synthesis of findings from a few case studies at national, regional, state, and local levels. In addition, a specific case study for east Texas is summarized along with implications for other parts of the South.

According to the United States Department of Energy, 66,000 jobs, $10 billion in capital investment, $460 million in taxes, and $1.8 billion in income have been generated from the nation’s 6,500 megawatts (MW) of wood-fired power plants. In the Northeast, consumption of each 1,000 tons of wood energy has created 1.96 jobs and about $46,600 in income, according to the Connecticut Office of Policy and Management. In the Southeast, these numbers are close to 1.39 jobs and almost $24,000 in income, according to TVA. In addition, consumption of each 1,000 tons (wood biomass equivalent) of black liquor in the Southeast has generated an estimated 0.77 jobs and $11,000 in income2. At the state level, a study from Georgia indicates that 95 jobs, $32.7 million in income, and $991,000 in state taxes could be generated by establishing a forest biorefinery using 440 dry tons of woody biomass daily3. Another Georgia study indicates that a large (533 WTPD) scale biomass gasification facility would create 95 jobs, $22.2 million in impacts and $776,000 in tax revenues4.

A case study for east Texas illustrates the potential economic impacts of the utilization of logging residues for electricity production at the local level. The study area consisted of 43 counties in east Texas (Figure 1). This area is endowed with 11.9 million acres of timberland, the majority (93 percent) of which is controlled by private owners including non-industrial private forestland owners, industries, and timber investment management organizations (TIMOs). Forestry and the forest products industry have traditionally played a significant role in the local economy. For example, about $17.5 billion in output and 76,000 jobs were provided by the industry in 20045. Yet, according to the Texas Forest Service, over the past 21 years, 19 sawmills, five plywood mills, three paper and paperboard mills, and 17 wood treating plants were closed in the area because of overcapacity and industrial adjustments6. Another important industry in the region is the energy sector (energy production, processing, and distribution). It accounts for about 22 percent of the region’s total industry output7. 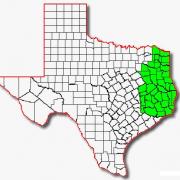 There are about 1.47 million dry tons of collectable logging residues in the area annually, which could generate 1.44 terra watt hours (TWh) of electricity. This production would create as many as 1,340 jobs (570 jobs from logging residue procurement and 770 jobs from electricity production). These jobs would represent about 32.5 percent of the current logging employment in the area. In addition, $215 million in value-added would be generated from this bioenergy development, accounting for about 60 percent of the current value-added from the logging industry. The total impact on output was estimated at $352 million (Table 1) or 38.5 percent of the current total output from the logging sector8.

* Direct impacts are impacts that affect the logging industry.

** Indirect and induced impacts affect sectors other than the logging industry.

This study also showed that the output and value-added multipliers were smaller than the employment multiplier, meaning that this bioenergy development would have a stronger ripple effect on employment than on output. This is extremely crucial to rural areas like east Texas, looking for employment and economic development opportunities to sustain the prosperity of local economies.

In summary, production of woody biomass feedstocks, bioenergy, and bio-based products could induce significant socioeconomic impacts, particularly in terms of job and income creation. As such, development of the forest bioenergy and bio-based products industries could serve as a catalyst for rural economic development. However, socioeconomic impacts of biomass and bioenergy development are influenced by many factors and vary from project to project. It is imperative to perform a project-specific assessment to understand the actual impact of a given bioenergy project or industry.

2 Gan. J. 2006. Impacts of forest biomass and bioenergy develop­ment on local and regional economies. An invited presenta­tion at the Energy from Wood: Exploring the Issues and Impacts for North Carolina conference, March 13–14, 2006, North Carolina State University.

3 Das, K.C. and E.D. Threadgill. 2005. The Economic Potential of an Integrated Biorefinery Industry in Georgia: Conversion of Biomass to Fuels, Chemicals, and Value Added Products. Unpublished position paper provided to the Governor’s Agricultural Advisory Committee, Office of the Governor of Georgia. Report available upon request to the University of Georgia, Faculty of Engineering, Athens GA 30602.