The name “solar power” is actually a little misleading. Most of the energy known to man is derived in some way from the sun. When we burn wood or other fuels, we are releasing the stored energy of the sun. Tidal, wave, ocean currents and wind are all the result of solar energy. Even the fossil fuel that we consume today is solar energy captured and stored millions of year ago. In fact, there would be no life on earth without the sun. However, the term solar power or solar energy usually refers to the direct conversion of the sun’s rays into a usable energy source either through photovoltaic cells or thermal collectors.

Mankind has harnessed wind power since ancient times. Wind powered sea going ships have existed for centuries. Wind has also been used to provide power and water for agriculture essential to the growth of our country. Unlike their predecessors, modern wind turbines are large and powerful. Today, their long blades (130 feet or more in length) efficiently catch the wind and convert the spinning movement into electrical energy by an efficient generator.

Hydropower makes use of the kinetic energy that water gains when it drops in elevation. It has been very important to our nation’s development. Hydropower was used for irrigation, watermills, textile machines, sawmills, and to power various other machines. Hydroelectricity is electricity produced by hydropower and supplies 10% of the US electricity today or enough power to supply 28 million households with electricity, the equivalent of nearly 500 million barrels of oil. Typically, water dammed in a lake or reservoir is released through turbines and generators to produce electricity. Other distinct types of hydropower are now being developed. These include tidal, wave, current, and temperature differentials.

Ocean Thermal Ocean thermal energy conversion, or OTEC, uses the temperature difference of seawater at different depths in which cold water is pumped from the ocean depths (as deep as 1 km) to the surface and extracting the energy generated from the transfer of heat between the cold water and warm surface water. Oceans are continually heated by the sun and cover nearly 70% of the Earth’s surface and their temperature difference contains a vast amount of solar energy which could potentially be tapped. The total energy available is theoretically higher than other ocean energy options such as wave power, but the small size of the temperature difference makes energy extraction difficult and expensive.

Geothermal energy is derived from the immense thermal reservoir of the earth’s interior. Temperatures hotter than the sun’s surface are continuously produced inside the earth by the slow decay of radioactive particles. This heat can be used by geothermal power plants (usually in the form of steam or hot water) to generate electricity. Only in certain regions of the earth, is the geothermal energy close enough to the surface to be commercially exploited. Surprisingly, four US states (California, Nevada, Hawaii, and Utah) generate more geothermal electricity than any other country, but the amount of electricity it produces contributes to less than 1 percent of total electricity consumed in United States.

Biomass is the most widely used renewable energy source in the world today. It currently comprises 10.6% of the world’s total energy supply. Biomass is produced from organic materials, either directly from plant and animals or indirectly from industrial, commercial, domestic or agricultural products. Biomass commonly refers to plants grown for biofuel. It excludes, however, any organic material transformed by geological processes such as coal or petroleum. Biomass contains stored energy from the sun. Plants absorb the sun’s energy in a process called photosynthesis. The chemical energy in plants is transferred to animals and people when they consume these plants. Biomass is a renewable energy source because if sustainable practices are employed, new crops, trees, livestock, and waste will always exist. Some examples of biomass fuels are wood, crops, manure, and some garbage. Biomass may be burned to produce heat and steam, bio-gas can be collected as it decomposes, it can be fermented into ethanol, converted to biodiesel,or it may be converted in a number of other ways. Biomass has one paramount advantage over other renewables. It is the only renewable energy source that yields carbon-based molecules, the essential ingredient to the numerous items that we depend upon each and every day (plastics, adhesives, solvents, paints, lubricants, transportation fuels, etc.)

Woody biomass is defined as the accumulated mass, above and below ground, of the roots, wood, bark, and leaves of living and dead woody shrubs and trees (Foster et al. 2007). It is primarily comprised of carbohydrates and lignin produced through the photosynthetic process. 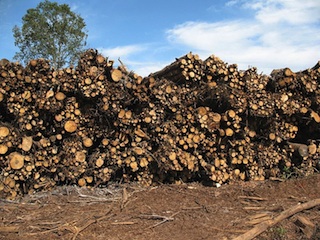 The principal sources for woody biomass in the United States are:

Woody biomass can be used for

The generation of electricity, although easy to implement at this time, is one of the lowest value-added uses for woody biomass. Bioproducts are the highest value-added uses. All of which are likely to be well under the potential value of traditional sawtimber products. Wood; wood residue and byproducts; and bushes, shrubs, and fast-growing trees, grown specifically for energy, are all considered woody biomass. It is unlikely that any one of the renewable energy alternatives will make much of a dent in replacing fossil fuels independently, but combined, renewables can make great gains towards reducing our nation’s dependency upon foreign fossil fuels.