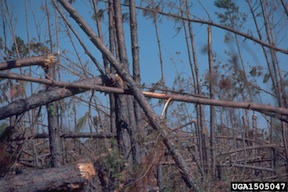 Clean up operations after natural disasters, such as hurricanes and ice storms, produce large amounts of debris that have traditionally been piled up to burn or rot. Debris from these disasters is largely underutilized, but changes have occurred in recent years. After Hurricane Ivan blew through the Florida panhandle in 2004, Escambia County managed 6.5 million cubic yards of woody debris, 60 percent of which it exported to Italy for energy generation. A company called American Biorefining shredded millions of tons of tree debris the following year after Hurricane Rita affected thousands of acres of eastern Texas forests and destroyed a number of roofs and homes. The material was then shipped to European countries for biomass fuel (Yepsen, 2008).