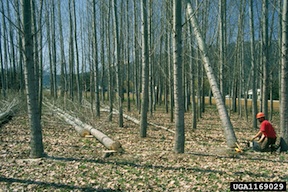 Fast growing short rotation woody crops (SRWC), such as hybrid poplars, willows, and other species, are specifically grown to be an energy feedstock. The species of trees are often chosen because they sprout from a cut stump. Properly managed, SRWCs can grow rapidly and be ready for harvest in four to eight years. After harvest, the site can be replanted, or the stumps can be left to regrow. Ideally, the sprouts soon form a few dominant stems, which are then ready for harvesting again within another four to eight years. For some species, this can be repeated several times before replanting becomes necessary. Growing short-rotation energy forests can also be combined with wastewater disposal, as sewage and wastewater from food processing factories and farms can contain nutrients that can accelerate tree growth. Using wastewater to irrigate a SRWC plantation offers an opportunity to mitigate point-source pollution, which is water pollution that comes from a single source such as a pipe or culvert.

Short rotation woody crops have shown promise as an economically viable strategy for producing a sustainable supply of wood biomass. Fast growing species can be planted at relatively low costs and harvested in less time than traditional species. Biotechnology is expected to substantially increase energy crop yields in the future.