Under current market conditions, cost remains a major barrier to market penetration of forest bioenergy. However, technological advances as well as social, political, economic, and environmental factors, will affect the cost competitiveness of this renewable energy source. In some Nordic countries, for example, the use of wood for energy production has been viable due to environmental taxes on fossil fuels or credits for bioenergy. The United States is currently investing in bioenergy research and development that will have a positive effect on bioenergy production and consumption. In addition, environmental and national security policies (energy and economic) are also shifting to favor biomass and bioenergy production. This fact sheet discusses the current status of forest biomass production from an economic perspective. In particular, factors affecting the production cost of forest biomass and bioenergy will be highlighted as well as the costs and competitiveness of this alternate energy source in terms of feedstock, electricity, ethanol, and carbon displacement.

Research has compared the cost of delivered woody biomass with that of delivered coal on a per unit energy basis. The production cost of short-rotation woody crops was estimated to be about $52/dry ton ($10.80/Megawatt hour [MWh]), while the national average price of delivered coal was $5.32/MWh in 20051.

The average cost of delivered logging residues (at a maximum transport distance of about 62 miles) is estimated at $28/dry ton ($5.80/ MWh) using the marginal cost method and $33/dry ton ($6.80/MWh) using the full cost method3. The marginal cost method counts only additional costs from the conventional logging operation as the biomass production cost. The full cost method allocates the total production cost across biomass and conventional wood products such as sawtimber and pulpwood (Figure 1). Compared to the biomass produced from energy plantations and forest fuel reduction thinnings, logging residues appear less costly, particularly when using an integrated harvest system, which allows for cost sharing between timber harvest and residue procurement. 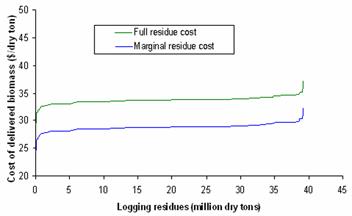 Many developed countries currently use most woody biomass for generating heat and electricity. In the U.S., however, our major energy concern seems to be liquid fuels for transportation use. Yet, it is likely that more biomass would be used for electricity production as some programs and policies such as the renewable portfolio standards are implemented to encourage the production of electricity from renewable sources. 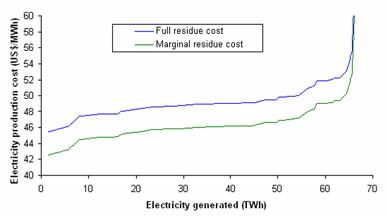 There are several reasons for this cost difference. First, the initial cost for a biomass gasification system is almost 50 percent higher than the costs for a conventional coal or gasification system4. Second, fuel costs also play a role in the cost differential. Biomass fuel is more costly than fossil fuels on a per unit energy basis as described earlier1.

A near term, low cost option for using woody biomass for electricity production is to co-fire with coal. With some modifications of the feed intake system and burner in most existing coal power plants, up to 15 percent of the energy input can be substituted with biomass. The costs of co-firing installations are about $50 per kW of biomass generation in cyclone boilers and range from $150 to $300 per kW in pulverized coal boilers. To be cost effective, the biomass cost should be at least as low as the cost of coal per unit of energy5.

Cellolusic ethanol production is still in its infancy. Its current production cost is about $2.25/gallon. This cost is expected to reduce to $1.07/gallon in 2012, similar to the current production cost of corn ethanol. Though cellolusic ethanol costs more to produce than corn ethanol, the former is much more energy efficient than the latter, in terms of the ratio of energy output to energy input in the product life cycle6.

While carbon in wood is released when burned, trees store carbon as a result of photosynthesis. As such, the production and consumption of bioenergy is a carbon neutral process so it can offset CO2 emissions from burning fossil fuels. The use of logging residues in electricity production appears to be a relatively economical option for carbon dioxide mitigation compared to other more costly operations. Using the marginal cost method for residue procurement, the carbon dioxide mitigation cost of generating electricity from logging residues would generally range from $40/ton to $60/ton of carbon. Using the full cost method, the cost range would be $50/ton to $70/ ton of carbon3. The costs for other mitigation options, such as recycling and improving automobile fuel efficiency, usually range from $83 to $164/ton of carbon7.

About 40 million dry tons of logging residues can be recovered annually in the United States, of which close to half is available in the South. If this biomass were used for electricity production, about 19.4 million tons of carbon would be displaced (Figure 3). This is equal to about 3 percent of the total current carbon emissions from the U.S. electricity sector3. 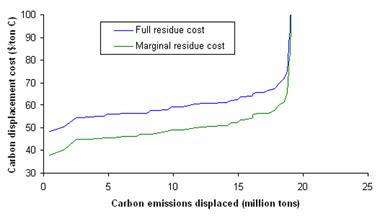 There are several ways to increase the economic competitiveness of woody biomass production and use. One alternative is to reduce the non-fuel costs of biomass power generation by improving the efficiency and effectiveness of current biomass-to-bioenergy conversion technology. Another way is to reduce fuel costs. Improvements in feedstock productivity and biomass harvesting and transportation systems could decrease the cost of the delivered feedstock. Imposing a tax on carbon dioxide emissions or providing an incentive for bioenergy would also promote its development.

In summary, under current market conditions, forest biomass, in general, is not cost competitive with coal for electricity production. Even the most economical source of biomass, logging residues, is far from being cost competitive with coal for electricity production. Yet, electricity generation using logging residues represents an economically viable option for carbon dioxide emission mitigation. Similarly, cellolusic ethanol is more costly than gasoline, even than corn ethanol at this point. However, forest bioenergy production can help reduce our dependence on imported oil, generate positive socioeconomic impacts (particularly on employment and income), and contribute to rural economic development. With proper incentives provided to producers and consumers to account for these environmental and socioeconomic benefits, forest biomass and bioenergy markets are likely to emerge.