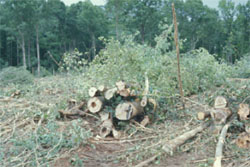 Residues from forest harvesting operations include logging residues (i.e. branches, tops, and stumps) left on-site, low-quality commercially grown trees, dead wood, and other noncommercial tree species. Other residues include wood that has been cut and burned during land conversion, precommerical thinnings, and other management techniques such as a crop tree release and timber stand improvement (TSI). Harvesting residues and other removals are routinely left behind at the harvest site because they are expensive to transport and there are few markets for the material. However, harvesting residues and other removals amount to approximately 67 million dry tons annually, and of this, approximately 41 million dry tons are economically and physically available for recovery and use, according to the United States Department of Agriculture Forest Inventory and Analysis (FIA) programs’ Timber Product Output (TPO) Database Retrieval System (USDOE and USDA, 2005).

The possibility of using woody biomass for energy production and other products has the potential to create markets for these harvesting residues. As a feedstock source, harvesting residues are generally delivered in one of the following three forms: unconsolidated material, comminuted material, and bundled material. It can also be converted, in-woods, to a higher value product.